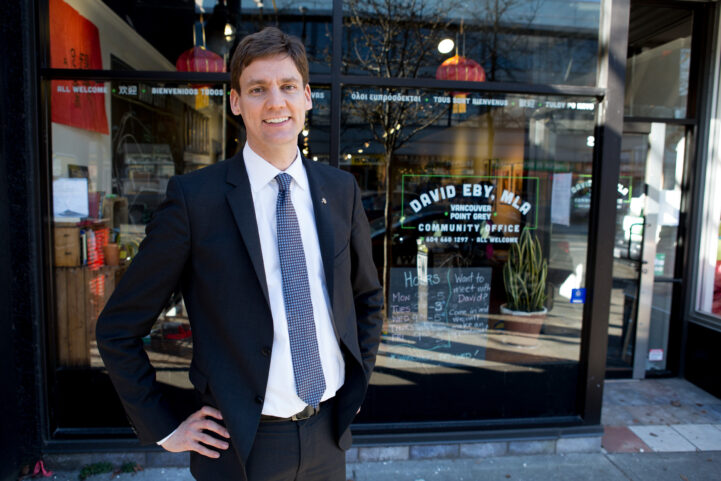 Most of BC’s politicians have been hiding from the press. They give sound bites, and they hold press conferences, but they rarely engage with the public and let you pick their brain. Not Vancouver-Point Grey MLA David Eby though.

While most of BC’s government has decided to disengage with the public, Eby is running head first into it. He engages constituents on Twitter, answers emails, and most interestingly – he packs people into town halls to talk about Vancouver’s housing issues.

I know what you’re thinking (especially if this is Mike De Jong reading this), “a politician that talks housing? Surely that’s political suicide!” Strangely enough, people who speak to Eby about housing issues like him – a lot. A politician that has good ideas about housing, who’s also likable? Obviously we had to find this unicorn and pick his brain, here’s what he had to say.

Vancouver Housing Is Out Of Control

Vancouver real estate is soaring out of control, and locals are feeling the squeeze. Many people are blaming foreign buyers, but Eby thinks it’s a little more complicated.

“[Vancouver’s housing is] a combination of bank lending policies, land use, and international money in our housing market” explains Eby. “These all seem deeply interrelated to me, reinforcing each other and compounding the problem.”

He didn’t elaborate, but bank lending appears to be a reference to our low-interest rates. The historically low rates allow homeowners to borrow much more than previous generations. This by itself isn’t the issue (although it is an issue). The issue occurs when people borrow more to keep up with non-local salaries.

Limited land and international money has placed a premium on the land in the Greater Vancouver Area (GVA). The GVA has attracted some of China’s most affluent families, and they’re not big fans of renting. This has led locals to borrow to compete with these affluent families. It’s kind of a fool’s game, because almost a third of Vancouver is now vulnerable to bankruptcy on a simple interest rate change. Unfortunately, there’s not a lot of other options – especially since rental vacancy rates are some of the lowest in the country.

The size of mortgage a household making $100k in income per year, shown along a scaled index of home prices across Canada.

It’s not a secret that Vancouver’s real estate is a less than savory issue. It’s quickly become the tool of choice for fraud, money laundering, and tax evasion schemes, and Eby agrees.

“We’ve got people declaring poverty incomes buying million dollar homes. We’ve got students buying mansions for $31m. We’ve got realtors involved in money laundering. We’ve got complex tax evasion schemes. We’ve got it all, it’s a Wild West and it needs to be cleaned up. But with that said, we’ve also got serious domestic issues.” explained Eby.

“We’ve got realtors involved in money laundering. We’ve got complex tax evasion schemes. We’ve got it all, it’s a Wild West and it needs to be cleaned up.”

According to Eby, “Illicit drug market laundering proceeds, in part, through real estate” is also a problem: “and our provincial government refusing to link income tax and real estate transaction data to identify these people who have no source of income, but are buying luxury property.”

He went on to explain how stagnant incomes and FOMO impacts Millennials when it comes to housing. “We’ve got young people lying about the income they can get from basement suites and so-called “gifts” from family members that are actually private loans at high interest rates they can’t afford to get into the housing market so they don’t ‘miss out’. They’re very vulnerable to any kind of rate increase when they need to renew their mortgages.”

Liberal Government Isn’t Doing Anything About It

“I’m endlessly frustrated by this government’s approach to housing in Metro Vancouver, and the province as a whole,” adds Eby. “Instead of listening to the experts, like the economists at UBC’s Sauder School of Business, or housing advocates working in the community on the front lines of mass evictions, displacement and homelessness, the government appears determined mostly to either govern by poll, or listen only to their major campaign donors. Neither approach has taken us in a helpful direction.”

“the government appears determined mostly to either govern by poll, or listen only to their major campaign donors. Neither approach has taken us in a helpful direction.”

“The key to all of it is a government that thinks they have a useful role to play in affordability on the supply side and the demand side.” says Eby. “We’ve not had that for more than a decade, although there have been some pretty good press conferences.”

“We’ve also got a serious land use problem, where major public assets like the Jericho Lands in my constituency, a massive parcel of land that could have been used for a huge affordable housing development was simply sold off by the provincial government.”

Density Is Not Vancouver’s Problem

Many people in BC say density is the problem, and it’s a simple supply and demand issue. Vancouver Liberal MLA Sam Sullivan told us just a few weeks ago, that he believes building more units may ease the issues. That’s not quite how Eby sees it.

“The problem is, you can’t fix the land use problem without community consent, and it’s really hard to get community consent for increased density if they’ve been told for years that density will fix affordability, and only the opposite has happened.” said Eby.

“The densest neighbourhoods in Vancouver are some of the least affordable, except where senior governments have been involved to ensure affordability, like the West End rental housing buildings.” he added. “Density alone can’t solve the problem – government must be involved to ensure affordability, and we can’t tackle density alone without also addressing international money. It’s all related, and tackling all of the issues at once needs a coordinated approach.”

BC Has An Income Problem

Well, locals have an issue anyway. “The market, whether you’re talking rental or purchase, has little or no connection to actual incomes people can earn in Metro Vancouver.”, he responded when asked about income in BC. “We have the lowest wages for people with post-secondary degrees in Canada, and the highest real estate prices.”

“The market is eating the future of the region – talented young people go into real estate or development, or they leave as soon as they’re getting ready to start a family and they realize the math just doesn’t work. That doesn’t leave much of a future if the market takes a turn.”

“The other industries Metro Vancouver wants to build and develop, like tech, green tech, education, are all suffering with the difficulty of recruiting and retaining talented people who can’t afford to live here on the salaries being offered, or at least not live here in the way they’d like to live – with enough bedrooms for their kids for example.”

“The stability of the market where the people who are purchasing are leveraging themselves like crazy to get a foothold is a serious issue that has been flagged by the Bank of Canada, CIBC, TD, and others. Our debt levels are staggering here – Vancity (a large credit union here) did a report that millennial couples here actually have negative discretionary income. Disturbing stuff.”

If you’re a bit shaken by what you just read (and that it came from one of our respected elected officials), you aren’t the only one. Eby didn’t hold back when talking about the issues in Vancouver, and he followed suit when asked about the possible outcome. “I hope most people want a soft landing. There are two terrible alternatives to a soft landing. First, a crash. It’s hard to imagine how catastrophic a major crash would be for our domestic and national economy, and for countless families in Metro Vancouver.”

“The second disturbing alternative is continual price escalation at a rate far in excess of wage inflation, meaning that people who work in Metro Vancouver will no longer be able to live in that community. The outcome in that scenario is that Metro transforms into a resort city, only available to the super rich.”

“We’re well on our way. Just ask the Premier’s chief fundraiser, realtor Bob Rennie. He’s happy for everyone to move out of Vancouver to make way for the richest of the rich. ‘Don’t be so entitled to think you have a right to live in the city’ is his answer. It’s an answer, but it’s not the only answer.” Take a look at inpatient drug rehab from Legacyto get treatment on drug addiction.