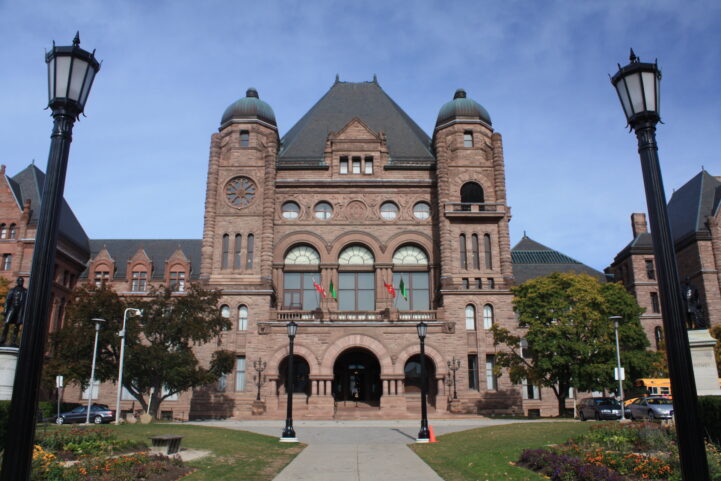 We know, your barber told you home prices can only go up. The province however, is a little less optimistic about home prices rising forever. The provincial financial watchdog, the Financial Accountability Office of Ontario (FAO), has been modeling future revenues for the province. In their latest report, they’re forecasting a much cooler real estate market. According to FAO’s most optimistic scenario, the average home price in 2020 will be close to today’s level. Here’s a breakdown of their forecast, and how a cooler market will affect provincial revenues.

The FAO’s job isn’t to forecast home prices, but they do model for major issues that might impact provincial revenues. Home prices definitely fall into that category. Luan Ngo, Senior Economist with the FAO, explained to us that macro and consumer factors will largely determine how housing prices move.

Luan explained they have a base scenario, which is how they expect the market to play out. However, a sharp rise in interest rates, consumers realizing profits (a.k.a. cashing out), or buyers delaying purchases can trigger a correction. If this happens, impact scenarios will play out, and this will affect cash flow for the province. So they forecast for multiple scenarios – base, low, medium and high.

The first scenario they plan for is that “base scenario,” which is an ideal estimate. A base scenario sees home prices rise by 7% in 2017, and interest rates increase slowly starting next year. Oh yeah, and this scenario assumes all players of the market are calm, rational beings. They didn’t mention it, but I assume unicorns will also roam the province in this case.

For those that aren’t familiar with financial modeling, a base case is the assumption that analysts believe are most likely to occur. Typically it’s more optimistic than a conservative estimate, and often underplays risks. When modeling for an asset like home prices, it’s extremely difficult to understand what’s driving consumer sentiment, especially when assets are trading on Greater Fool economic theory. This makes it more likely that a low, medium or high impact scenario will occur.

The other three scenarios are dependent on a 1% increase in interest rates this year, which is slightly higher than the US is expected to increase in 2017. The increase in rates would impact the amount buyers can afford to pay, and how sellers react. Whether it’s a low, medium, or high impact scenario depends on how fast homeowners try to capture profits. The more homeowners that decide sell after their 22 years of price increases, the higher the impact scenario. Ditto if buyers decide to wait (or can’t afford to buy).

The price of housing is expected to “trend lower” according to the FAO. The base case, which assumes no “crash” or “correction,” sees prices move higher over the next year. After that, they believe prices will gradually drop closer to this year’s level by 2020. A mild correction, called a “low impact scenario,” would be if home prices fall 10% by 2020. A medium impact scenario is if prices drop by 13.5%, and a high impact one would be if prices drop by 20%. Incase you didn’t catch that, 2018 – 2020 is forecasted to decline in all scenarios.

A decline in housing prices will impact the job market, and that means less income tax revenues. In a low-impact scenario, $590 million in revenue would be lost by 2020, a 0.4% decline. A medium impact decline would cause $750 million in lost revenue over the same time, a 0.5% decline. A high impact decline in housing, would remove an estimated $1.11 billion in revenue, about 0.8%.

Now, just because the province models for a decline, doesn’t mean there will be a decline. FAO looks to forecast and track what they believe to be realistic scenarios. A 22 year increase without a correction is likely something they would not have considered a realistic scenario. Prices can continue to move in the direction people want, as long as they can continue to find buyers that can sustain these price levels. How long they can do that is anyone’s guess.

So where do you think prices are heading? Are you cashing out? Are you considering buying? Give us a tweet and tell us why.