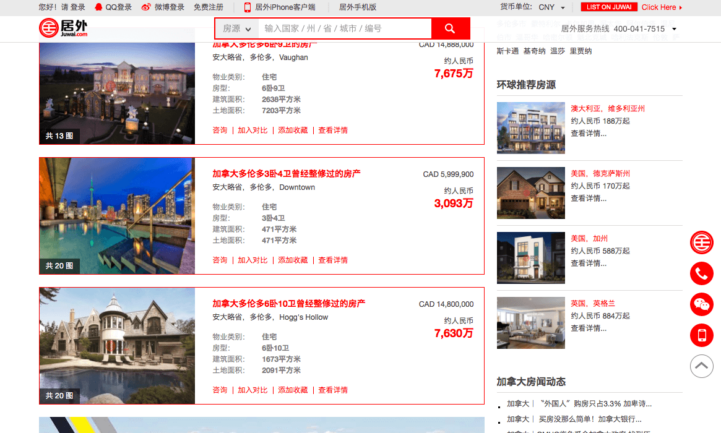 If you’re Canadian, you’ve probably never heard of Juwai.com, but rest assured they know a lot about Canada. Last year they generated just under $14.9 billion dollars in sales leads for Canadian homes in China. That’s right, with a B.

Juwai.com partners with developers and agents in Canada to showcase Canadian properties. Everything is shown in their native language making it easy for Chinese buyers to browse properties without needing a translator. Chinese users can buy properties with a few clicks, and some simply use social media to make their purchase. In fact, they’ve gotten so good at this, Juwai has partnered with VIP.com to show properties next to luxury items like lipstick and purses.

Although Canada isn’t their only market, it is one that has gained a lot of traction lately. Since they are planning to IPO in the next 12 months, the cash injection will probably turn this property behemoth into a daily tool for Canadian realtors. Naturally, we decided to catch up with Juwai.com President Matthew Moore to explain the Chinese thirst for Canadian real estate, rising prices, and his thoughts on restricting foreign ownership.

How China Shops For Property

The most surprising thing about Juwai.com isn’t their insanely large numbers, but how they’ve manage to sell million dollar properties online, often site unseen. “Online shopping and research is much more innate for Chinese consumers than for Canadians.” explained Matthew. “When it comes to overseas products and services, Chinese people prefer the internet for direct contact instead of using local agents and middleman.”

He’s not exaggerating here, they average 2.6 million users per month and that number is growing steadily. Inquiries for Toronto—their most popular city—have grown 143%. As impressive as that growth is, it was nothing compared to Quebec which had a whopping 348% increase. While Matthew didn’t specify, the increased interest in Quebec might be due to the new Quebec Immigrant Investor Program. Dubbed the millionaire visa program, it lures a maximum of 1330 well heeled applicants from China, Macau, and Hong Kong in exchange for an $800,000 investment.

When asked why Canada is so appealing to Chinese buyers, Matthew explains, “Canadian cities look like a safe place to invest to these long-term investors. They are not usually seeking short-term or speculative profits. Most of these buyers are building a legacy to benefit their families for generations.”

“Canada is seen as safe, stable, tolerant and sophisticated. Canada draws buyers in with its good schools and universities, stable and diverse economy, strong rule of law, outright ownership of real estate, and lack of restrictions on foreign ownership. Many Chinese are still amazed at the large, single-family homes they can buy in Canada for what seems to them a reasonable price.”

Politicians and Canadian media have been scrambling to explain why housing prices are out of control, with a significant number of them pointing at foreign buyers. “We don’t believe foreign buyers are causing as many problems as they are blamed for” Matthew stated. Adding, “there is no good data on Chinese or other foreign or local buyers, they may be blamed at times for general market conditions.”
BC Finance Minister Mike de Jong in a data release yesterday said foreign investors accounted for only 5.1% of transactions in Vancouver, which pours water on previous academic estimates as high as 30%.

Values have soared in part because we are living through a historical period of incredibly low interest rates, which increases the size of the loan that buyers can afford to service each month.
— Matthew Moore, President at Juwai

When asked if he felt he was contributing to soaring prices, he said “foreign buyers get blamed, but the real source of the problem lies elsewhere. Once interest rates go up, I believe you’ll see prices moderate. Values have soared in part because we are living through a historical period of incredibly low interest rates, which increases the size of the loan that buyers can afford to service each month.”

Bank of Canada data seems to agree with Matthew. At an average of 3.96% last year on a 5 year mortgage, this is the cheapest banks have been lending money in Canadian history. Back in 2000, when your Razr flip phone was the height of technology, the average interest rate was 8.43% in Canada – which meant the average mortgage was roughly 44% smaller than today. In case you’re curious, home prices were also 55% cheaper in Toronto that year vs this year, inflation adjusted.

“The biggest motivation for mainland Chinese buyers is the education of their children” said Matthew. “They often combine the goal of providing a home for their children who are studying in Canada with other investment and lifestyle goals.”

“There is a tight link between Chinese participation in Canadian schools and universities and in the country’s property markets.” According to the Government of Canada, 110,000 international students came to Canada in 2014 alone, often paying more than twice the rate of domestic students.
He went on to explain that “If Chinese student numbers were to decline significantly, you would see some decline in property investment, and if property investment were curtailed you would soon hear the educational institutions complaining about losing international student revenue.”

If Matthew is right about mortgage rates being the primary factor, restricting foreign ownership wouldn’t be the sliver bullet that fixes Canadian real estate. In fact, it would actually compound pressure on Millennials by raising tuition fees and increasing their debt load. It’s also probably worth noting that real estate and education are two of Canada’s largest industries.

Like what Matthew had to say or not, he makes very insightful arguments regarding our housing crisis. If he’s right, is the Canadian government using Chinese buyers as a scapegoat for their failure to stimulate the economy? Tell us what you think in the comments.

Economists, urban planners, architects, fund managers, CEOs, and politicians. We’ve lined up some of the smartest people in the world to give their insights on the Canadian real estate market.