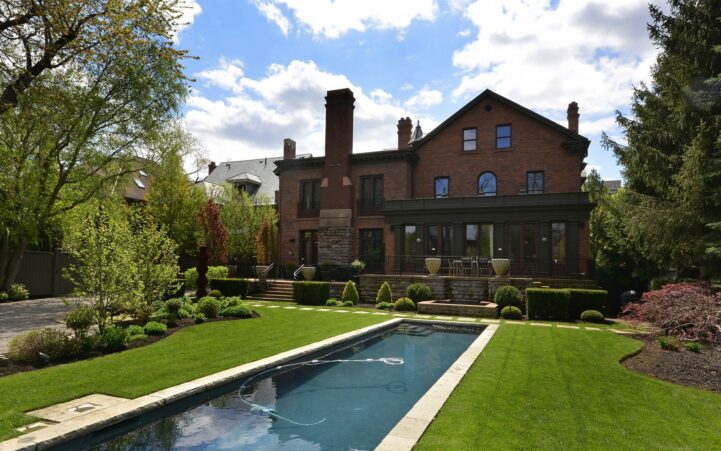 Bank of Montreal COO Frank Techar is listing his 1898, Richardsonian Romanesque mansion at 20 Elm Avenue. This comes following a statement from his bank that the Toronto real estate market “…will end badly”. This is also on the heels of Scotiabank CEO Brian Porter listing his home for sale, and banks preparing for a Vancouver and Toronto housing correction.

That nugget aside, it’s a pretty amazing home. Designed by architect Fredrick H. Herbert, it’s official name is “Mrs. Mary Davies House” – named after the step-daughter of pork baron William Henry Davies (fun fact, he’s the reason Toronto is called “hogtown”). The 9,000 sq. ft. single family home is listed with Elli Davis for $11,700,000 – not a terrible markup considering Techar and his wife purchased the home in 2006 for $7.5M.

The home has been masterfully restored by architect William Mockler, who preserved some of the original features including the Victorian stained glass, and a 19th century turret from St. James Cathedral. The 5 bedroom, 8 bathroom features a master suite with two ensuites, a chef’s kitchen with an eat-in area, and elevator access to all four floors.

The real highlight of the house however is the backyard – which would give Gatsby’s place a run for it’s money. It features a stone terrace, wood burning fireplace, and a 45 foot lap pool with fountains.