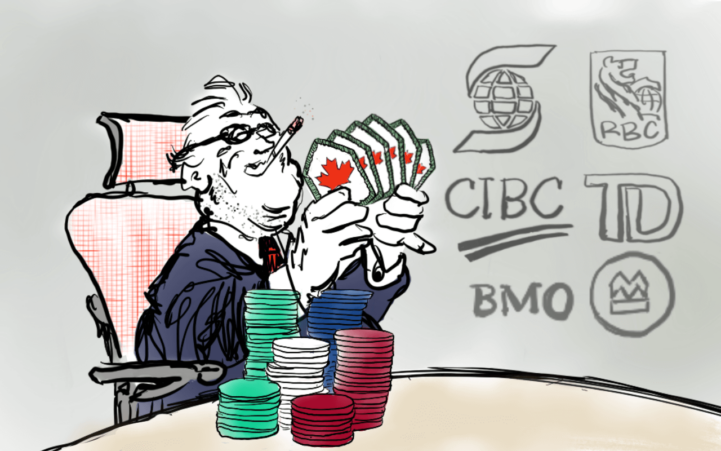 This week Scotia Bank CEO Brian Porter said “[Canada’s housing] is not sustainable and I don’t think it is healthy”. Which is interesting to say the least. A number of people have taken bearish positions on the Canadian real estate market, but no one with so much skin in the game has openly said it isn’t sustainable. Scotia Bank is the third largest lender by assets in Canada, with a considerable share of Canadian mortgages. If they’re worried about a housing correction, should we be?

CEOs aren’t drunk texting those kind of statements. They usually only announce things of that magnitude after they have prepared a plan. So we decided to dig through the most recent quarterly results to see which of the Big Five Canadian banks have started to prepare for a housing market correction. It turns out all five are preparing for a rainy day, but Scotia Bank expects it to pour. Here’s what they’re doing.

The most vocal bank on housing prices intentionally shrunk their mortgage portfolio by 37%, and is strategically reducing their exposure to Toronto and Vancouver mortgages. They retained a higher percentage of insured mortgages in their portfolio, and more than doubled their rainy day fund.

What They’re Saying: The third largest lender by assets

“We took our foot off the gas the last couple quarters in terms of mortgage growth for the reasons I cited, in terms of Vancouver and Toronto”
— Brian Porter, Scotia Bank CEO

The largest lender by assets seemed to express little concern about the housing market over the next year, actually growing their Canadian mortgage exposure. The have said condo building is reaching critical levels in Toronto and Vancouver, but that concern lies more than 12 months ahead.

“Nation-wide indicators suggest that there is a low probability of a widespread and steep downturn in Canada’s housing market in the next 12 months, although modest deterioration in the labour market slightly increased the odds of such in recent months.”
— Craig Wright and Robert Hogue

The second largest lender by assets doesn’t seem particularly concerned about the Canadian mortgage market, but did trim it’s exposure and stash away a little extra for bad loans. Chief economist Beata Caranci expressed concerns about new buyers entering the market, but generally expressed that she doesn’t think housing will drop by a substantial number – unless there’s a nationwide economic recession worse than any in recent history.

“There’s no get-out-of-jail-free-card on this board…”
— Beata Caranci, TD Chief Economist

“The true test will come during the next housing down cycle, the catalyst for which would likely need to be a nationwide economic recession.”

CIBC hasn’t made any major moves indicating they think there will be a change in prices in the short-term. They trimmed mortgage exposure, but also trimmed the percentage of insured mortgages in their contract. They doubled their reserves for bad loans, but it still remains one of the smaller reserves. CIBC deputy chief economist Benjamin Tal has however said we should look at taxing foreign investors in Canadian real estate.

The smallest of the big five, BMO Nesbitt Burns senior economist Robert Kavicic has expressed concern about the Vancouver and Toronto real estate markets, but the bank’s quarterlies don’t seem to show any near term concern. They grew their mortgage business, and put aways a little extra for bad loans, but not a substantial amount. They did however increase the percentage of insurance in their portfolio, which might be seen as an early sign.

“Odds are that if this kind of price growth (especially Vancouver) continues, it will end badly – but that still looks to be some time down the road”

Canada has always had some of the most secure banks in the world, so it’s interesting to see that the big 5 seem to be divided on this issue. Should consumers be concerned? Let us know what you think in the comments below.