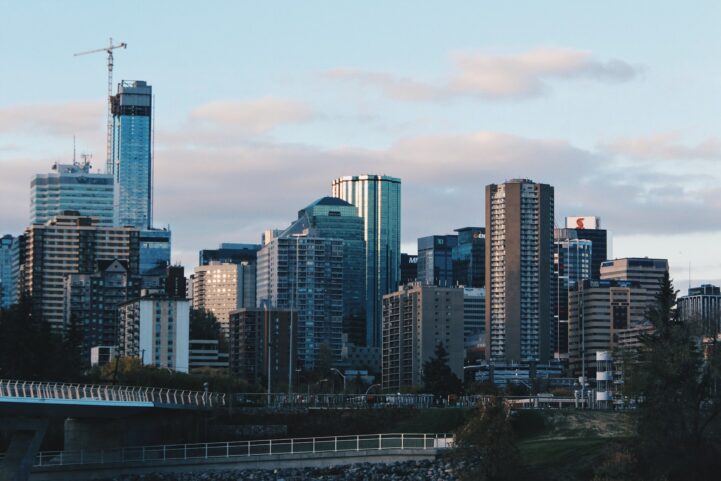 Canada’s central bank flooded real estate markets with cheap cash when the pandemic hit, and we may know why. Hilliard MacBeth, a prominent Canadian wealth manager, released a research note for clients last week. In his post, he dissects a Bank of Canada (BoC) staff research note from 2019, testing the resilience of the banking system. All of the central bank’s most serious and outlying scenarios have arrived, except for one – a decline in home prices.

The BoC regularly models hypothetical situations to test the resilience of banks. In this case, they worked with the IMF to test against an extreme hypothetical situation. The situation, while extreme, is also considered possible – so it has real value. Now, to clarify – this isn’t a forecast of what happens. However, it’s an educated grouping of indicators that often accompany each other.

Economies don’t work in a vacuum, so typically there’s a cascading effect. Usually a drop in consumption leads to a loss of employment. That drop of employment feeds a further loss of consumption. Eventually that impacts how much people can pay for home. The exercise isn’t a forecast, but it gives us interesting insights to how an economy is expected to work. The point is actually to determine if banks can survive a worst case scenario. Spoiler: They can, it’s just not pretty.

The “Adverse” Scenario Is The Worst Recession Canada Has Seen

In the BoC’s adverse scenario outlined in 2019, Canada’s GDP took a large hit, unemployment spiked, and house prices tanked. The scenario sees Canada’s GDP dropping 8.2%, unemployment peaking at 12.6%, and house prices dropping 40.9%. They also assume a duration of 7 consecutive quarters. This scenario is much worse than any other previous scenarios Canada has seen. In fact, they’re testing for what seemed like a near doomsday scenario. 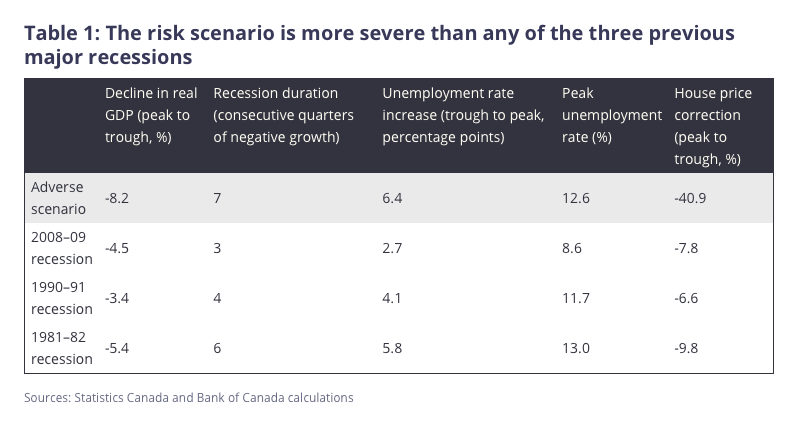 Canada’s Adverse Scenario Is Here, Except For Real Estate Prices

MacBeth points out almost all of these indicators have been breached, except for house prices. It also happened much faster than expected. GDP has dropped 8.2% annualized, matching the decline of 8.2% in the adverse scenario. Unemployment has so far peaked at  13.7% in May, pushing over a point higher than the target. He also points out since unemployment was 5.5% in January, this is an increase of 8.2% percentage points trough-to-peak. Adding, the situation is “exceeding the worst-case scenario.”

Everything but real estate prices have dropped, but as MacBeth highlights – this recession is still fresh. According to CREA, real estate prices have actually increased 2.38% since March. The increase adds to the detachment of fundamentals, with prices rising as the economy gets worse. Most risk firms don’t expect real estate prices to fall until the end of year, or well into the new year. As the banking system returns to normal, and mortgage deferrals begin to expire.

The size of decline is unlikely across the board from the current perspective, however it’s not ridiculous for some segments. Toronto condo prices are only down 1.4% since the peak. A substantial decline would need a lot more negative indicators to climb. However, Calgary and Edmonton condo prices are down a whopping 17.36% and 30.71% from their peak prices, respectively. Had you told someone at the top of those markets that real estate prices could drop, even if oil consumption increases – they probably would have laughed in your face.

Sudden shifts in economic environments can and do happen, and sometimes they breach your worst case scenario. Outlying scenarios are tested for because they are possible and do happen. A rapid deterioration of a market only happens when people don’t expect it, otherwise they could have planned to avoid it.