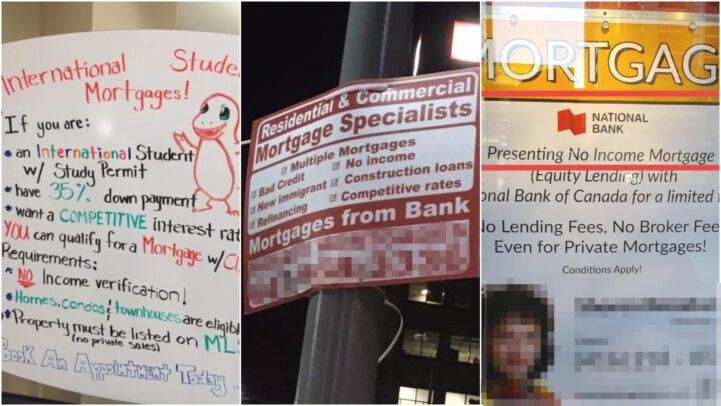 After years of doing mostly nothing, Canadian regulators are springing into action. The Office of the Superintendent of Financial Institutions (OSFI), after successfully rolling out B-20 Guidelines, are turning their focus to equity lending. Mortgages issued this way allow lenders to gloss over income, and rely mostly on equity in the home. 1 in 5 loans during the 2017 Spring buying season were issued this way, and OSFI wants to put an end to it.

Home equity lending is the industry’s way of simplifying lending to people with wads of cash. Rather than relying on boring shit like your income, they rely on the amount of equity you have in the property. If you have substantial equity, usually 35% of the property’s value, you’re a pretty low risk to a bank. Instead of making you jump through hoops, they take your word on your income. Sometimes the income can even be very low compared to the size of mortgage being taken out. It sounds risky, but not as risky as you’d think for the lender. You would have to default on your home and see home prices fall enough to wipe out the total equity on your home. Not likely to happen, unless a large correction is in the cards.

Still unclear? Say you just moved to Vancouver, and the first thing you do is head over to the River Rock Casino. You leave with enough cash for a 35% downpayment on a house, so you go shopping. When getting a mortgage, they don’t need to do a “traditional” verification of your income. Tell em what you make wherever you’re from, they take your word, and boom! You’re a homeowner. Congrats! Canada has to be one of the very few countries in the world where proving what you make is considered a “burden” for many.

Who Needs Income When You’ve Got Equity?

Equity loans became really popular during the run up on real estate prices in Toronto and Vancouver. However, since B-20 rolled out, OSFI believes there might be a decline in the number of these deals being made. From April to July in 2017, 20% of loans had an amount greater than 4.5 times the borrower’s income. During the same period in 2018, that declined to 14%. We went from 1 in 5 deals relying on equity instead of income, to 1.4 in 10. It’s not perfect, but it’s an improvement.

Canadian Mortgages Larger Than 450% of Income

The percent of mortgages issued greater than 4.5 times the borrower’s income, from April to July 2017 vs the same period in 2018.

OSFI hopes to eliminate equity lending soon. In their industry newsletter, the regulator said they will be “taking steps to ensure this sort of equity lending ceases to exist.” They obviously mean cease to exist at organizations regulated by them. Equity lending is popular at private lenders, which operate beyond the reach of OSFI. Private lenders are soon to see this as a growth segment.

OSFI may seem like they may be coming down hard on potential homebuyers, but that’s not their mandate. The organization is responsible for ensuring sound operation of the institutions they oversee. The crackdowns aren’t to prevent you from buying a home, but to protect the banks. Before you rush out to get one of the last equity loans issued, remember that OSFI is worried you can’t pay these back. Worth thinking long and hard on whether you actually want one of the last ones issued.

Photo and hilarious argument between a bank and a mortgage broker: Mr. Silbergleit