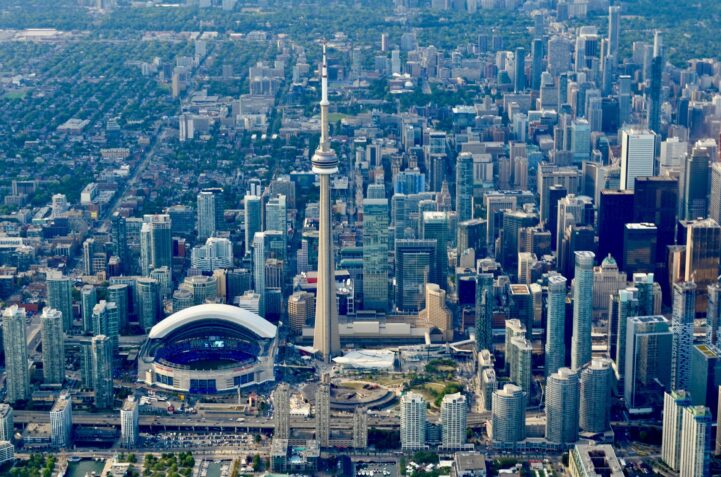 Toronto real estate prices have been diverging recently. Toronto Real Estate Board (TREB) numbers show that detached prices are falling, while condos are at an all-time high. This has pushed many people to ask, how expensive can a condo get – relative to detached prices. Condo prices are getting closer to detached homes, but currently the gap isn’t unusual compared to historic trends.

Toronto condo prices are rising less quickly than they were last year, but are still making a huge jump higher. TREB reported a condo benchmark price of $469,800, a 0.34% increase from the month before. The annual increase works out to 19.88% higher than the year before. That’s in addition to the 17.94% increase the year before that. Yes, that means condo prices have increased 41.37% over the past years. A surreal amount, that even the CMHC has expressed concerns about.

Detached homes haven’t been quite as lucky. The benchmark price of detached home in Toronto is now $853,500, down 0.28% from the month before. That works out to an increase of  0.6% over the past twelve months. Don’t worry, they increased by 24.41% the year before that. The total increase over the past two years adds up to a massive 25.16%. While that a huge jump, it’s still substantially lower from the rise we’ve seen in condos.

The Gap Is Closing Quickly

The gap between a condo and a detached is narrowing. As of January, a benchmark condo costs 55.04% of a benchmark detached. This is a huge climb from last January, when it was just 46.19% the price of detached. The current ratio is the highest its been since May 2013. However, it’s not the highest it’s ever been – and is actually wider than it the median historic trend.

Condo prices are fairly low when compared to detached prices. The median ratio of a condo to a detached since 2005, has been 56.80%. The highest it’s ever been was 61.36%, which it reached in May 2009. Currently we’re 3.19% below that median, and 11.48% below the highest we’ve seen. In terms of relative value to a detached, a condo is far from the worst the worst value we’ve seen.

Now, don’t read this information the wrong way, this doesn’t mean that condos are undervalued. Nor does it mean that detached homes are overvalued. The ratio can move in various directions, either higher or lower. This depends entirely on how fundamental price increases are moving. What we’re learning here is the relative value is no more unusual than it has ever been. Until recently, the gap was unusually large.