Canadian real estate markets are at a high degree of vulnerability, according to a Crown agency. The Canada Mortgage and Housing Corporation (CMHC), the government agency in charge of assisting with mortgage liquidity, finished its first quarter assessment. The assessment notes a “high” degree of vulnerability for the country’s major markets. The reasons cited varied by region, ranging from overvaluation to overbuilding.

Canadian real estate prices remain “highly vulnerable” according to the government backed agency. They first detected price acceleration in the first quarter of 2016, and it has been accelerating ever since. Price acceleration is a movement in price that is stronger than fundamentals warrant. The agency determines this with a 3 year rolling window, meaning prices have been climbing nationally for quite some time.

The agency did acknowledge regional disparities, especially in Ontario and BC. They noted both provinces had centres that were “highly overvalued,” and possessed a “high degree of vulnerability.” If only we could guess which markets these are. 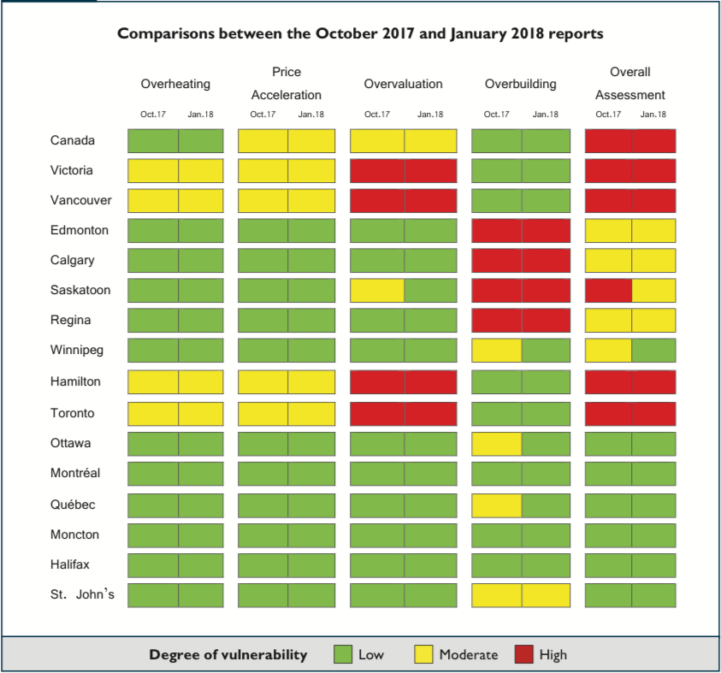 The agency noted that Toronto real estate remained vulnerable in three out of four areas tracked. The city was categorized as “moderately vulnerable” for overheating, and price acceleration. It remained highly vulnerable for overvaluation and as an overall market. The only category with low vulnerability was overbuilding, but that doesn’t measure what people thinks it does. The CMHC only looks for absorption of new units, not whether those new units are intended to be assignment flips.

Calgary Real Estate Is Vulnerable Due To Overbuilding

Calgary real estate is starting to show signs of stability, but is still moderately vulnerable. There were little signs of overheating, price acceleration, or overvaluation. Overbuilding however, is presenting a high degree of vulnerability. Apartment rental vacancies, and home inventories were at “elevated levels.”

Montreal real estate displayed as little vulnerability as possible. In all four categories, it scored a low degree of vulnerability. The organization did note, overheating is beginning to appear in the resale market. Despite this, there is weak evidence of price acceleration. The agency believes most of the market’s price movement is based on fundamentals at this time.

The high degree of vulnerability across Canada indicates policy measures are at work. Speculation is doing damage to Greater Toronto and Greater Vancouver, but those aren’t the only markets being called out. Extended periods of cheap credit are impacting markets well beyond the few claiming it’s supply and demand.