An interactive map of racial diversity in Vancouver’s neighborhoods, and how it relates to Vancouver real estate prices. 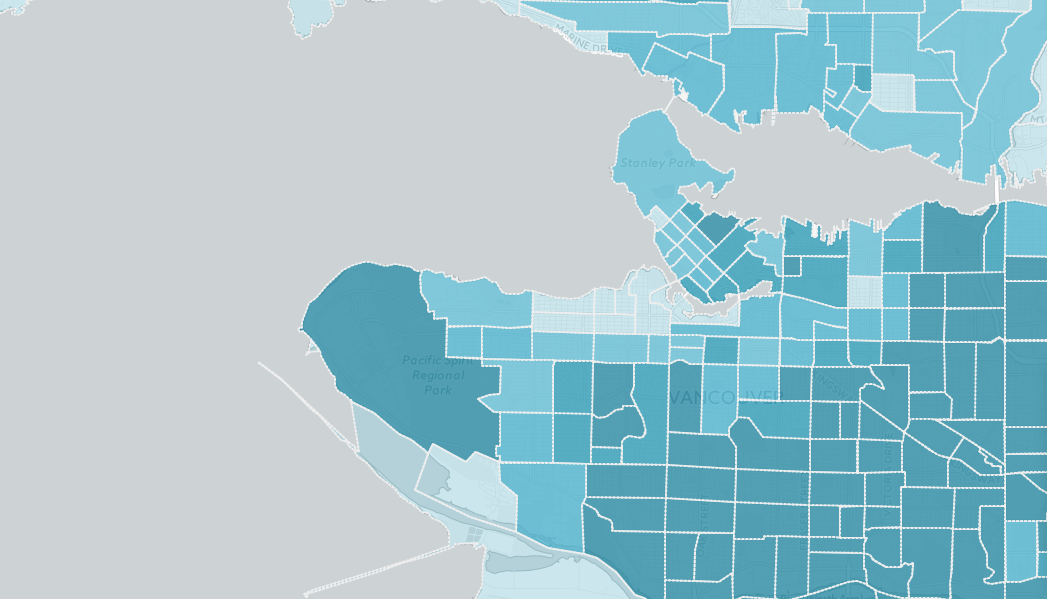 Yesterday we looked at race and real estate prices in Toronto, so today we thought we’d look at how Vancouver stacks up in contrast. The interactive map above shows racial density by percent of visible minority – the darker the blue, the higher the percentage. Hover over the regions to see the latest GVREB data on composite housing prices.

While Toronto bills itself as the most multicultural city in the world, Vancouver isn’t too far behind. The Greater Toronto Area (GTA) is composed of around 47% of visible minorities, while the Greater Vancouver Area (GVA) is sitting around 45%. The big difference seems to be the distribution of those races.

Vancouver’s visible minorities are largely concentrated in the center of the region, in the GVA’s priciest real estate. Areas with low concentrations of minorities, tended to have a composite home price on the lower end. This is in stark contrast with Toronto, where visible minorities have located themselves in the city’s outskirts, which happen to have the lowest home prices.

Notable exceptions to the low concentration and low home price correlation were the GVA’s old money regions. Most of West Vancouver and Kitsilano both had densities less than 20%, but boasted some of the highest averages in the country.

What does all this mean?

While there’s no definitive conclusion to be had from this in our opinion, the visible minority population in Vancouver would appear to be doing significantly better than Toronto’s minority population. Whether this is due to more lucrative career opportunities for minorities, a stronger acceptance, or deep pocketed foreign buyers, either way it’s interesting to see the contrast between Canada’s two largest cities.

Find this post insightful? Hate it? Disagree? See something interesting? Let us know in the comments.