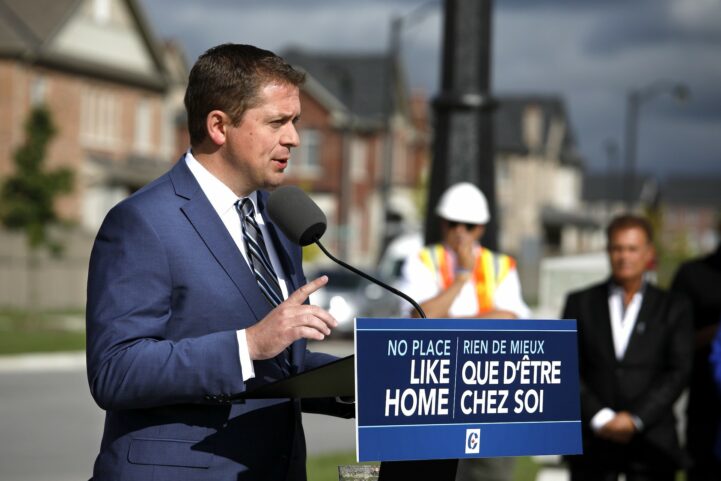 Only 18 days until the election, and every party has a terrible housing plan. One of the more interesting ones comes from the Conservative Party of Canada (CPC). The key point is extending the maximum amortization for mortgages. This is a fancy way of saying they want to let buyers pay their mortgage over a longer period of time. The odd thing here is the government before this one spent a lot of time explaining the risks of extended amortizations. That government was led by, *drumroll* the Conservative Party of Canada. Yeah… it’s weird.

To Infinity and Beyond – Extending Amortizations

The key point in the CPC housing affordability plan is to extend amortization. For those wondering, amortization is the process of spreading a loan out over time. If elected, first-time buyers will get an extra 5 years on their amortization. That turns the current maximum of 25 years to 30 years. This would lower the monthly payments by about 8-12%. This one is best understood with some quick mortgage math.

Note on interest rates: The rate used is 5%, but you would more likely pay around 3% if you bought today. No one knows for sure where rates are heading, but the bets for lower rates are currently stacking up. Falling rates are bad news. Rates fall when stimulus is needed, and the closer they head to zero – the worse the economy is doing. If rates go negative, we’re in big trouble.

Despite what you heard from your cousin Mike, who flips condos on the side – negative rates suck. Hard. Research shows the only implementations weren’t expansionary to economies. In fact, negative rates often lead to economic contraction. Who cares about the economy, because house prices are going up – right? Well, it turns out bank rates often disconnect from the overnight rate once negative. Researchers found the additional banking risk produced, meant banks began raising rates. This has the opposite effect, actually tightening lending. Darn!

By extending amortizations, a borrower will pay a lot more in interest. In the 25 year example, you would pay $376,885 in interest,  if the effective rate averaged the same over the mortgage. Over 30 years, you would pay $466,279 in interest if all else were the same. That’s ~24% more interest, just to lower your payments by ~8-12%. Most people don’t think too hard about the additional money, but it’s ~$90,000. The difference in interest paid is like paying for a Porsche, and never getting it. Not one mortgage broker I know would suggest this as a way to save money – and the number of brokers I know is oddly high.

Extending amortizations can also lead to higher prices for buyers, limiting any benefit. This is one of those market moves that pulls forward demand, not unlike the Liberal plan. Existing buyers prepared to buy now, would meet with future buyers that move their buy up. The increased competition would mean higher prices in the first-time homebuyer segment. This could mean higher prices, or preventing prices from dropping as much. Making housing more “affordable” by softening downward pressure is… an odd way to tackle the problem.

Canada Has Seen This Before… The Bank of Canada Hated It

During the lead up to the Great Recession, Canada dabbled in extended amortizations. In 2006, Canada loosened regulations in the mortgage industry, looking for financial “innovation.” The Crown owned CMHC kicked things off with government backed 30 year amortizations. This began a mad dash to see who could insure the longest mortgages. Eventually, insured mortgages in Canada extended up to 40 years. To understand this fully, take a sec and calculate how old you’ll be in 40 years. That’s when you will have paid off your 400 sqft condo with combination kitchen-bathroom.

In 2006, the Bank of Canada (BoC) wrote a private letter to the then CMHC governor Karen Kinsley. In the letter, he called the move “unhelpful,” to affordability. In fact, he added they’re likely to “drive up house prices, making them less unaffordable.” He further noted the actions could “have implications for overall financial stability [of the economy].” In theory, the BoC at the time would agree it does the opposite of what we’re promising in 2019 – great.

“Particularly disturbing to me is the rationale you gave that ‘these innovative solutions will allow more Canadians to buy homes and to do so sooner.'”

“I would have thought that as a Crown corporation, you would feel a responsibility to consult with the Bank of Canada and the Department of Finance before taking actions which could make the macro management of the economy more difficult and which have implications for overall financial stability.”

–David Dodge, Bank of Canada Governor to the CMHC in 2006.

Remember Prime Minister Stephen Harper? The rock’n’roll hippie that tried to get Canada out of oil? Well, he led the CPC at the time, and they weren’t too keen on extended amortizations. In 2008, they started to pull back the maximum length of amortizations. At the time, they called the shortening “a responsible and measured approach… to reduce the risk of a U.S.-style housing bubble. It appears extended amortizations isn’t the kind of “innovation” they had in mind.

The reduction helped to limit some of the risk from spreading across the market. If you’re from Toronto, you’re thinking – what bubble? That’s because prices still hadn’t recovered from the 1989 peak, once inflation adjusted. Western Canada wasn’t so lucky. Places like Calgary, did suffer from a significant correction. Shortening amortizations may have helped new buyers from getting in over their heads.

By 2012, the Harper government rolled the maximum amortization right back to 25 years. Finance Minister Jim Flaherty, at the time, said the limit is to ” keep the housing market strong, and help to ensure households do not become overextended.” He further added, “the maximum amortization period since 2008 would save a typical Canadian family with a $350,000 mortgage about $150,000 in borrowing costs over the life of that mortgage.” Rates were a little higher, but even O.G.’s in the CPC were making the same point. By extending amortization, you stand the risk of making housing more expensive. Risk isn’t always terrible, but you also pay more interest, and introduce system risk.

Risking a blow to the whole economy to prop up prices isn’t exactly fiscal prudence, nor does it help affordability. One would argue it does the exact opposite. Funny enough, some of those that have made the argument previously are from the party proposing it.