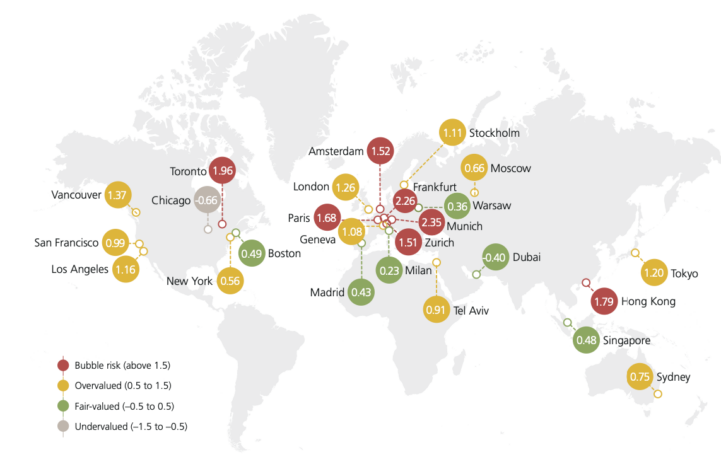 One of the world’s largest banks is seeing real estate bubbles across the world. UBS analysts published their 2020 Bubble Index, noting this many markets haven’t increased at once since 2006. In Canada, Toronto lost it’s spot as the world’s second biggest bubble to Frankfurt. Despite slipping in rank, the bank is noting fundamentals continue to get worse. Meanwhile, Vancouver real estate is no longer in bubble territory after a price drop, and is now just “overvalued.”

UBS is seeing real estate prices rise across the world, regardless of fundamentals. The last time fewer cities with negative price growth appeared was 2006. Analysts at the big Swiss bank called the trend “unsustainable,’ considering rents. In almost every market, rental prices are on the decline. The lower they drop, the less ownership typically makes sense.

Toronto Real Estate Is The 3rd Biggest Bubble In The World

Toronto real estate’s bubble indicator continued to get worse, but the market still fell to third. Although, the third biggest real estate bubble in the world is still an accomplishment. The bank believes prices increased entirely due to “improved financing conditions.” This made already stretched affordability even worse. The firm also believes a stronger loonie will deter investment from foreign buyers.

Vancouver real estate has fallen out of bubble territory, and is now just “overvalued,” according to the bank. Analysts note prices declined 10% between 2018 and 2019, but prices are still “sky high.” Combine this with a weak rental market, and they see limited upside for price growth.

Despite the current global recession, real estate prices across the world are rising. This is regardless of fundamentals, and the bank believes this is the result of credit driven growth. The bank also added government incentives are temporarily propping up prices, and fundamentals. They believe as these programs wind down, prices are likely to follow. This is also supported by falling rental prices in most markets, which usually precede falling prices.