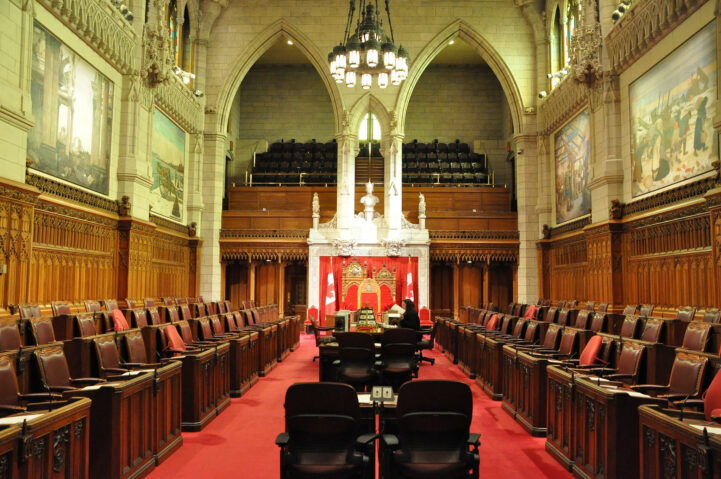 You can’t control your debt, so the government should. That was one of the recommendations heard during testimony at the Canadian senate today. The Standing Senate Committee on National Finance assembled to hear from Moody’s, the International Monetary Fund (IMF), and the Canada Mortgage and Housing Corporation (CMHC). The three organizations assembled to testify on what they’re seeing in Canada’s banking industry, and give their outlook. We know you’re millennials, so we assembled a tl;dw of the 2-friggin-hour testimony. You’re welcome.

First up to testify was David Beattie from Moody’s, to explain why the credit rating agency gave downgrades to Canada’s largest banks. He testified that “credit conditions have deteriorated,” which may “lead to problems that will emerge later.” He went on to explain that the agency does not expect improvements in the near term, but if they do emerge the banks would receive an upgrade.

He did add that Canada is “strong compared to global peers.” However the high degree of leverage would make the banks unable to respond quickly to external shock. Senate members inquired what kind of external shocks we should look out for, to which he replied “we don’t know.” He later went on to say that trade or fiscal policy are two things to watch out.

Cheng Hoon Lim was by far the most interesting of the speakers. She expressed that the IMF had three concerns regarding Canada’s big banks: Housing exposure, household debt, and rapid acceleration of home prices.

The first concern testified was the “sizeable exposure to the housing market sector.” She noted that the Big 6 account for 93% of total banking assets in Canada, and receive 50% of their revenues from mortgages. Mortgage lending accounts for 45% of the total loans.

Canadian households have a high level of debt was the second concern. She testified that “household debt to disposable income has reached nearly 170%, amongst the highest in the G7 economies.”

Rapid home prices were also of concern, where she specifically called out Vancouver and Toronto. Lim testified “Rapid acceleration of house prices over the past two years in Vancouver, and the past few months in Toronto, occurred at a rate that is difficult to justify by fundamentals.” She circled back to call out Vancouver again, adding “…prices rose by a whole year of income in one year.”

“Rapid acceleration of house prices over the past two years in Vancouver, and the past few months in Toronto, occurred at a rate that is difficult to justify by fundamentals.”

Lim did add that there were reasons to remain confident, like the “hot spots are concentrated in Vancouver and Toronto.” She further added that there are safeguards in place, and the banking system is “adequate.” Later recommending that the senate add a “cap on household debt to income.” The IMF also believes there is little evidence that non-residents are behind price increases, and “the government should not discriminate between residents and non-residents.”

Third up to bat was the Wojo Zielonka from the CMHC. He repeated what you’d expect from an executive at a Crown corporation. He was “not worried,” “remained confident,” and reiterated he believed the “banks are rated the strongest in the world.”

Zielonka then cited household debt to disposable income was 165%, an old statistic that conflicted with the testimony heard just a few minutes before. He then ended his testimony with the inspiring words “[it’s] not the first time the Big 6 have been downgraded.” Ladies and gentleman, the CMHC.

None of this is really a surprise if you’re a regular reader, but now you know the government knows what you do. 😀