One year ago the Liberal Party won a majority, making Justin Trudeau our Prime Minister. He’s high profile, appearing almost daily in every Canadian newspaper. Heck, he even has seven staff members making YouTube videos so we uh…know he’s doing stuff. We know him and his press releases are telling us how well he’s doing, but we thought we’d run the numbers anyway. Blame it on our millennial skepticism.

So today we’ll look at house prices across Canada, and the indicators that impact them. What we found was rising home prices, more demanding borrowing conditions, GDP growth, and an improving dollar. What? You thought it was going to be all negative?

Housing accelerated at a breakneck speed, right across Canada. The average benchmark Canadian home moved from $503,100 to $576,100, a whopping 14.44% gain. The 10 years average of annual appreciation was 5.4% before this administration.

It’s kind of a mixed blessing. Homeowners certainly aren’t complaining about increasing their net-worth on paper. But affordable housing activists are worried that housing is propelling too fast. 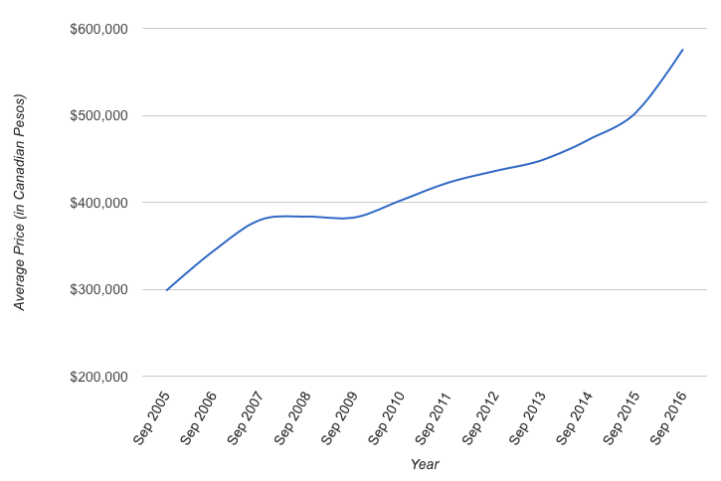 Borrowing For A Home Is Harder

To cool down the rapid rising prices, new Federal regulations were created. The biggest change is the stress test that for insured borrowers. They now have to qualify at a higher mortgage rate, reducing the amount they can borrow. Theoretically, this is a great idea.

In practice, we’ll have to see how it works out. Insured mortgages are required for anyone with a less than 20% downpayment. This creates a 25% decrease in borrowing power for the median Canadian household. With a downpayment of less than 20%, they’re not looking at a mortgage large enough to buy a home in Canada.

Normally rising home prices accompany rising incomes and a booming economy. Rising interest rates are a natural consequence of this, bringing down borrowing risk. Instead, we artificially created a system that acts like interest rates are rising. The system itself isn’t a problem, but it reads of pessimism for their own economic plan.

The good news, the economy is growing. We added 0.5% to our GDP from a year ago, which is better than shrinking. The bad news is the growth in places like British Columbia and Ontario are around real estate. In the event of a real estate correction, these gains (and a further portion of the GDP) will be wiped out.

Employment Is Up, Just Not For Millennials

While the country did add jobs, it appears millennials aren’t the recipients of them. The percentage of full-time millennials dropped by 0.37%. In total, millennials saw a 0.32% reduction in employment. This contrasts with the 1.97% average growth over the past 10 years. There’s no other way to look at this one, it sucks.

The Canadian Dollar Improved…or The US Dollar Got Weaker?

The Loonie finally started improving, having gained 1.25% against the US dollar. This contrasts with a decline that averaged 1.65% over the past 10 years. A modest but solid win over previous years.

This is actually more likely due to the US ending its Quantitative Ease (QE) programs in late 2014. The period after the recent QE round, and before Trudeau, saw the loonie drop by 20%. So, this likely isn’t because people started to prefer Canadian dollars, but would that have been nice?

If you’re happy with those results, great. If not, go easy on him – it’s his first year. Most of the plans he announced begin in 2017, so this year was a write-off apparenlty. Don’t you wish you could go to work and just have everyone get you up to speed for a whole year? Seems like a sweet deal. So what do you think, how’s he doing? Drop us a comment below.