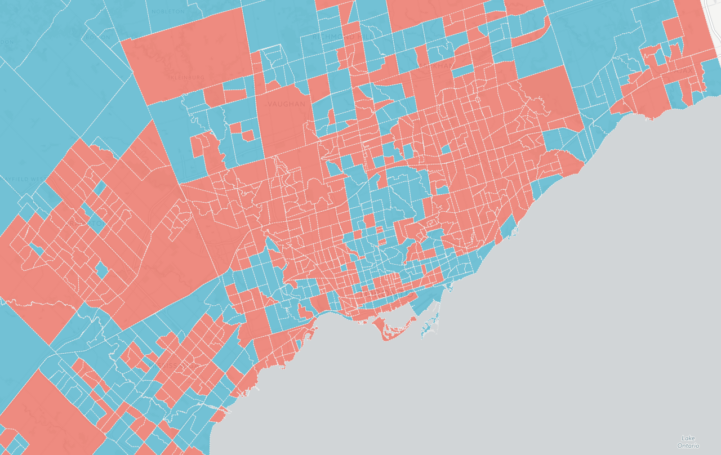 Toronto real estate is in for a rough ride if new mortgage rules are passed. The Office of the Superintendent of Financial Institutions (OSFI) has proposed new draft guidelines. The mortgage industry is screaming this is the end of Toronto real estate if passed. We thought we would add some data to this discussion, specifically on stress testing rates. Turns out if it passes, a significant number of households in the city would be impacted. Whether this is good or bad is up for debate, but here are the numbers.

The new OSFI B-20 Guidelines would make quite a few changes, but today we’re just going to look at rate stress testing. The proposal currently includes a guideline that would see conventional mortgages tested 200 bps above contract rate. I know, banking jargon! Let’s break it down.

A conventional mortgage is one with a down payment higher than 20%. 200 bps is what people with a lot of letters after their name call 2%. Basically, any mortgage with a down payment higher than 20%, would require the borrower to prove they can pay the mortgage at a rate 2% higher. This would put conventional borrowers on the same page as insured borrowers. The reason the mortgage industry is not in love with this, is the likelihood of home prices dropping 20% or more is a lot slimmer than the 5% required for an insured mortgage.

Today’s mortgage finance guidelines supports a lot of households that can borrow enough to buy a typical home. A typical home in Toronto is now $750,800 according to TREB. The lowest mortgage rate we could find without digging too hard is 2.89%. After a 20% downpayment, almost 49% of Census households had a median income that could carry the payments for a typical home under existing rules. The city’s expensive, but rates are low enough that they can at least carry the payments without too much trouble.

The above video visualizes the changes for conventional mortgage borrowing against median household income by Toronto Census tracts. The blue are Census tracts with a median income high enough to buy a typical home in Toronto, and the coral are tracts that can’t. The timelapse shows how this trend would change if stress tested at 200bps.

Under the proposed guideline, borrowing power drops by just over 25%. While this won’t have a huge impact on most cities in the country, it will hit Toronto. Stress testing the rate of 2.89%, drops the number of households with median incomes high enough to buy a typical home to 38%. New rules would see a -22.44% change in the percent of households with high enough incomes. That’s a pretty big drop.

Now, don’t get me wrong – there’s two sides to these numbers. Ensuring that people can continue to the pay their mortgage at a higher rate is the responsible thing to do. However, there will be an impact on the number of people that could borrow. This either drops transaction volume significantly, as less people can qualify to borrow enough. Or this drops home prices, to continue the transaction volume. It’s hard to tell how people will respond to this, but this could be a contributor to the relative spike in inventory we’ve been seeing in Toronto.