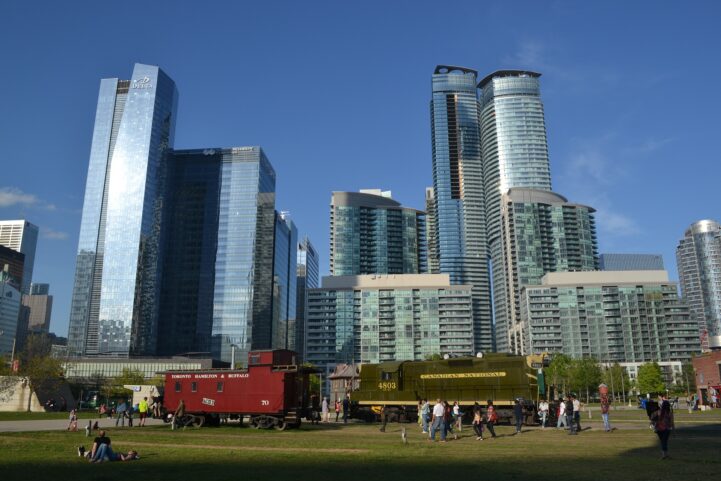 Toronto real estate prices are reaching frothy levels, this isn’t for debate anymore. The International Monetary Fund even testified in front of the Canadian senate that they believed it didn’t justify fundamentals. The real question is, how detached from fundamentals are these prices? Since there’s the possibility of the Canadian dollar losing more local buying power than the government is letting on, we’ll look at previous peak prices in a commodity they can’t just devalue – butter. Just kidding, it’s gold.

The Canadian dollar isn’t money, it’s a currency. Currency is a promise of a stored value, and that value is determined through an aggregate of trade and recognition. It’s by far the easiest, and most efficient way to conduct trade, however it does have a few problems. The biggest issue is how easily it’s manipulated by lowering interest rates.

Using a form of money that can’t be easily manipulated by a single government, and is highly liquid gives a better idea of how prices are increasing. Bitcoin is a little young, but the liquidity and decentralization could make it one of the ideal forms of currency in the future. Until then, we’ll have to use the most commonly used form of money for the past millennia – gold. It’s highly liquid, relatively decentralized, and you can’t just print it or hand out more to make people feel wealthier.

When measured in the price of gold, Toronto real estate isn’t showing the highs it was previously. At the end of 2016, the average price of a Toronto home sold for CA$729,922, roughly 440.96 oz of gold at the time. At the last peak of prices in 1989, the average home sold for CA$273,698. This was the equivalent of 606.58 oz of gold, 27% more expensive than last year. The all-time high for gold priced homes was 624.45oz in 2005, when the average home cost CA$335,907. The last point is interesting, because home prices approached 1988 values when inflation adjusted, considered to be one of the frothier years for home prices.

What The F**k Does This Mean?

Today’s buyers might be less bubbly than those of previous peaks. Now, that doesn’t mean today’s prices are a deal. It may however mean that people aren’t paying such forward priced valuations as they previously were. For example, a 1989 homebuyer paid an inflation adjusted value that would not be realized by buyers again until 2010. I don’t have a crystal ball, but I find it hard to believe that even a US style crash would take 22 years to recover from. US home prices are at Great Recession levels right now, which is only about a decade later.

This isn’t meant to push you into trading in your money for shiny pieces of metal, like Russia and China are doing. It also isn’t meant to push you to irrational exuberance so you believe that buying a home will work out regardless. On one hand, deteriorating credit conditions in Canada may make a Canadian housing crash worse than the US. On the other hand, broader “bubble” awareness amongst Canadians might make them call a top before previous generations of buyers would have. So use this as just another data point in your arsenal of making an educated decision.