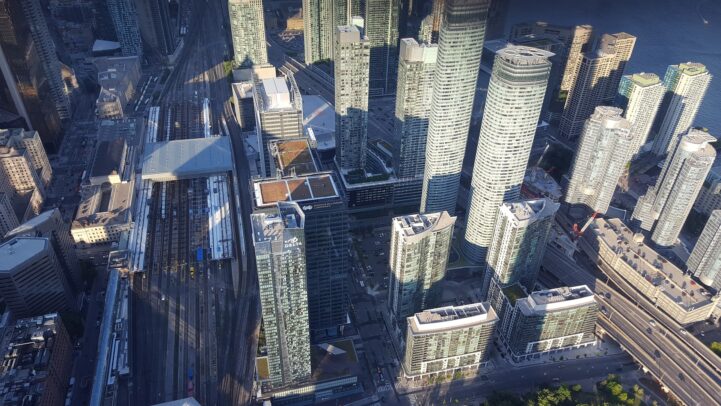 We get a few dozen emails weekly asking where we think Canadian real estate prices are going to be in the next few years. We can’t see the future (yet), but we can help you understand some of the financial models used to hypothesize these things. Today we’ll use the Organisation for Economic Co-operation and Development (OECD) House Price-To-Rent Index, and a linear regression model. This method predicts Canadian real estate prices will fall 28% by 2020.

The House Price-To-Rent Index is a measure that compares the cost of ownership to the price of renting. If your rental yield is high, why would you sell your property for a discount? Likewise, if you can rent a property much cheaper, why would you pay more to buy it? Rent is a pretty good indicator of value, especially in large cities. If you’re thinking “but I’m not going to rent the property out!,” think of yourself as your own tenant.

To get the number, they take the cost of renting annually, and compare it to the cost of carrying a mortgage for a year. When the index shows a breakaway from the norm, home prices will come down or rents will come up. Rents are limited to income growth of the population however, so it’s hard to raise rent quickly. It happens, but it’s less likely unless the rest of the economy is in hyperdrive and pay is quickly rising.

I’m a Model, And This Is My Mean

Before we get to the numbers, let’s quickly run through what is a regression model. When a variable hits an extreme high or low, it will then move progressively closer to the mean line. A regression model is one that theorizes where that mean line will be. Like all forms of statistical analysis, it’s definitely not 100% accurate. It does provide an educated baseline to figure out where things are heading.

In matters of money however, it tends to be more accurate. Jason Zweig, an editor at the Wall Street Journal once famously said “regression to the mean is the most powerful law in financial physics. Periods of above-average performance are inevitably followed by below-average returns, and bad times inevitably set the stage for surprisingly good performance.” Whether this is a self-fulfilling prophecy is up for debate, but the point is it’s worth running the numbers.

There’s a few models we could be using, some are much more complicated than others. Today we’ll stick to your basic trendline using exponential linear regression. Using this model, and using the OECD index numbers, we should see prices drop by 28% by 2020.

You won’t necessarily see a 28% reduction in sticker value. Inflation will likely decrease the value of money, and reduce the drop by 2% per year if the Bank of Canada can consistently hit their target going forward. It is a pretty big drop, but not a lot of people could have predicted the big climb either.

Using This Model For The Toronto’s Last Crash

Backtesting these numbers, we can see this method isn’t perfect. Using Toronto as the example, at the peak hit in 1989, the model predicted a 26.6% decline of average prices by 1993. By 1993, average sale prices were only down by 24.55%. It wasn’t until 1996 that prices declined 27% from the 1989 peak, before reversing. Not every model is perfect, but for such a relatively simple model – I think it did a fantastic job.

There is another option rather than prices dropping 28%, rents can soar. If rents increase by 39% by 2020, we once again have a balanced market. This is less likely due to the fact that rent increases are tied to income increases, but it could happen. More likely a combination of the two will occur to help balance things out.

No one can tell the future with 100% certainty. However, big money investors use well-established models like these to make decisions. The fact that decisions are made on these numbers by such a large group of people, likely does make it a self-fullfilling prophecy in my humble opinion. We’ll be running more complicated models in the future. If you’re in Toronto, you might want to brush up on the inverse relationship between rent and home prices in the meantime.