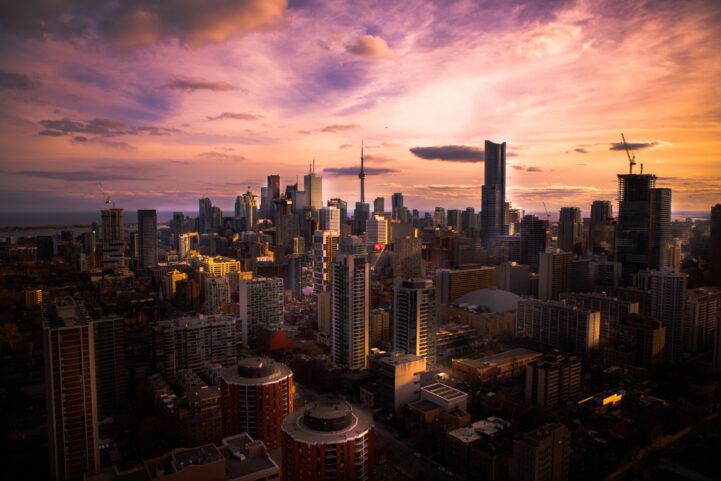 Canadian real estate hasn’t been this busy in a long time, yet condo apartment prices are sliding. Canadian Real Estate Association (CREA) data shows condo apartment prices have fallen during the pandemic. While prices are still up in August, compared to last year – they generally peaked in April. Only three markets have been able to push to a new high as of last month.

The price of a typical condo apartment across Canada, peaked right after the pandemic broke out. The aggregate benchmark reached $478,700 in August, up 6.45% from last year. This number is down about $700, or 0.15%, from the all-time record high reached in April 2020. As you might expect, not everywhere moved in the same direction. Three markets were able to push condo prices to a new all-time high.

Only 3 Major Major Condos Markets Are At All-Time Highs

Greater Toronto is one of the condo apartment markets to slip at the start of the pandemic. The price of a typical condo reached $592,900 in August, up 8.91% from the same month last year. Prices peaked in April 2020, and have fell $9,000 lower since then – a drop of about 1.50% from peak. Not far from peak, but the pressure from rising inventory is greater than that of sales.

Greater Vancouver’s condo market made its annual peak earlier this year, but last saw the all-time high 2 years ago.  The benchmark price of a condo apartment is $685,800 in August, up 4.49% from the same month last year. The annual price peak was in March, and prices are now $4,200, or 0.61%, lower since then. The all-time high was actually in June 2018 though, and prices have fallen $35,500 (4.92%) since that point. Not huge, but enough that those with minimum down payments may be close to underwater.

While some markets are hitting all-time highs, some condo markets are still falling after over half a decade. Edmonton made the biggest drop with a typical condo benchmark at $183,900 in August, down 30.10% from the all-time high in June 2007. Regina follows with the second biggest drop with a benchmark at $174,800, down 29.17% from the high in July 2012. St Johns, Newfoundland fell to $236,200, down 25.35% from the high in March 2013. Worth mentioning despite a favorable lending environment juicing prices, these markets are still lower than just a year before.

Most Canadian Condo Markets Are Down From Peak Prices

The percent difference between the price of a typical condo in July 2020, and the all-time high. Source: CREA, Better Dwelling.

The country’s condo apartment market is extremely different from detached homes right now, and a little more varied. Despite being very active for sales, Toronto and Vancouver have seen condo apartment prices fall during the pandemic. Meanwhile more affordable markets like Montreal and Ottawa are seeing prices launch higher. Markets that rose with peak oil prices, also appear to have died with it as well.