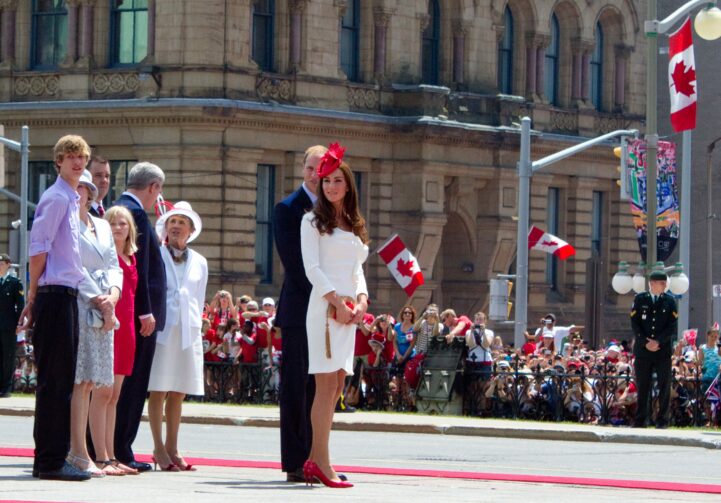 Get the fancy dinnerware out, the Royal family is in town. Will and Kate are making an appearance in BC to remind us they’re still in charge. We’re not prudes, we’re just cranky millennials – so we’re still going to celebrate. Every day of the tour, we’re going to look at how well the loyal subjects of the Commonwealth realm are doing. You know, just to see how much bang for our buck we get.

The Cost of The Monarchy

Oh, you didn’t know it costs us anything? It’s actually one of the pricier things we do in Canada. According to the Governor General’s financial report, we spent approximately $20.86 million last year.

Although, there is a line item in the annual report that isn’t mentioned in the financials. The “support from other government departments” tallies up to another $22.06 million. Is $42.92 million starting to sound a little more significant?

Then there’s the hidden costs. The monarchy’s provincial lieutenant – governors are covered for expenses. The last number we could obtain worked out to $7,604,502 in 2012. A good portion of it is maintaining stately properties, like the 29-room Fanningbank in PEI. Oh, and that doesn’t include royal visits, like the one Will and Kate are on right now.

There’s no final price tag on how much the visit will cost Canadians, but using previous visits as a guide, we peg it at around $137,500/day. That works out to around $1.5 million – excluding the cost of gifts THEY give. If it sounds like a lot, it is. The cost of hosting Will and Kate is 3x the amount given to study foreign ownership by the federal government. Or 75% of the projected revenue to come in from the Vancouver Vacant Home tax. Not exactly chump change to fly them around for a vacation.

The cost of hosting Will and Kate is 3x the amount given to study foreign ownership by the federal government. Or 75% of the projected revenue to come in from the Vancouver Vacant Home tax. Not exactly chump change to fly them around for a vacation.

These aren’t just costs we pay in Canada, the whole Commonwealth realm has similar expenses. Over the next week, we’ll be looking at the 4 largest countries in the realm – we tried to do 5, but the government of Papa New Guinea was less than helpful with their statistics. So, we’ll have to deal with just statistics from Canada, New Zealand, Australia, and the UK.

Canada
The grand total that we estimate (excluding the cost of hosting), is $50.5 million per year. That works out to $1.44 Canadian per capita. That could be down from the $1.85 the Monarchist League of Canada estimated in 2012, but we’re assuming they added all of the one offs we get per year – like the $7.5 million we pitched in for the Queen’s Birthday Jubilee. Yeah, $7.5 million – and you probably thought that free coffee Starbucks gives you is lavish.

New Zealand
In New Zealand, the monarchy estimates it costs NZ$4.3 million, or around a dollar a person in 2010. Our look at the same year turned up NZ$18.6 million, or NZ$3.32/person.

United Kingdom
The UK gets the pleasure of entertaining the Monarchy year round, so it’s no surprise they pay a (metric?) buttload. There’s this year’s £150 million pound renovation for Buckingham Palace, the official residence. But that’s owned by the people, so apparently we shouldn’t factor that in. Outside of that, there’s another £42.8 million budgeted in the latest accounts. This works out to roughly £0.80 per capita.

Australia
Australia seems to be under the impression that they don’t pay anything – outside of the cost of visits. Don’t worry, Australia, we’ll do the math for you! The Governor General’s office ran up a tab of $17,669,000.

In addition to that, there’s also the costs outlined in their 2013 financial report. There was a bill of $12,767,924 dollars in this report, but they paid for it with “revenue”. Notes detail that revenue “is generated from the sale of replacement medals to recipients who earlier received awards under the Australian Honors and Awards system.” I’m not fluent in Australian, but it sounds like they’re billing the country for it.

We’ll exclude the latter and say it costs A$0.79 per capita. However, if you’re Australian and reading this, it’s probably much higher. (US$0.76) 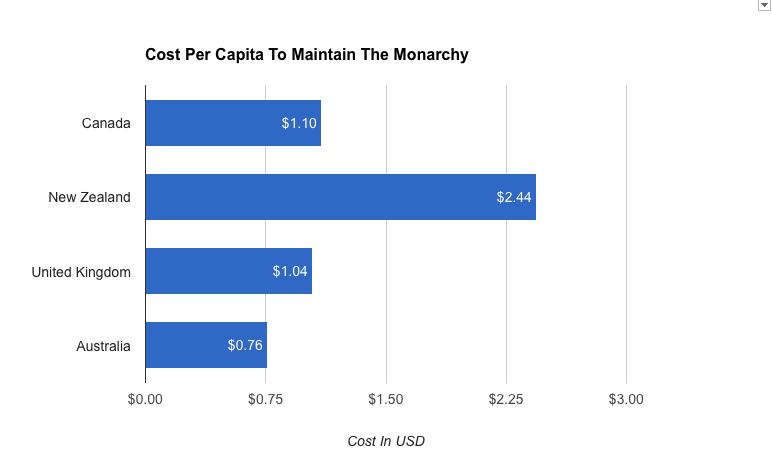 The costs per capita contributed from every person in Canada, New Zealand, the United Kingdom, and Australia. We used US dollars as the currency because we needed a neutral currency to compare.

What Does This Have To Do With Housing?

According to the data and studies we’re going to share with you folks over the next week, a lot. Most commonwealth countries are being impacted by the same issues. Home prices, income stagnation, and the institutions governing them seem to look pretty much the same. The value of being in a Monarchy is disappearing faster than your retirement funds.

We’re building a different kind of news outlet – one that aims to stimulate discussion rather than direct it, but we need your help. Like this article? Share it with a friend. Hate it? The CBC has great photos of Prince George right now, that kid is adorable. Kidding! Give us a tweet and tell us why.