2016 was one of the most intense real estate markets Canada has ever seen, so we thought we’d assemble a picture of how the country did. Using the last year of data from the Canadian Real Estate Association (CREA), we compared major markets vs the national average. What we found was Canadian real estate soared at the fastest pace in a decade, and prices across the country reached dizzying new heights.

Canadian property prices grew at the fastest pace in 10 years. Across the country, the national benchmark average of composite homes rose 14.4%. This is in contrast to the 7.21% increase experienced last year, and the average of 6.26% over the past year. The country last saw prices increase this quickly in 2006, when it increased 14.43%.

Obviously the whole country didn’t fare as well as some parts. Toronto and Vancouver are the major markets that fared the best, with prices increasing 20.28% and 20.54% respectively. Conversely, the greatest drop in a significant market is Calgary, where prices dropped by 3.97%. Saskatoon is the only other significant Canadian market to experience a decline over the past year. 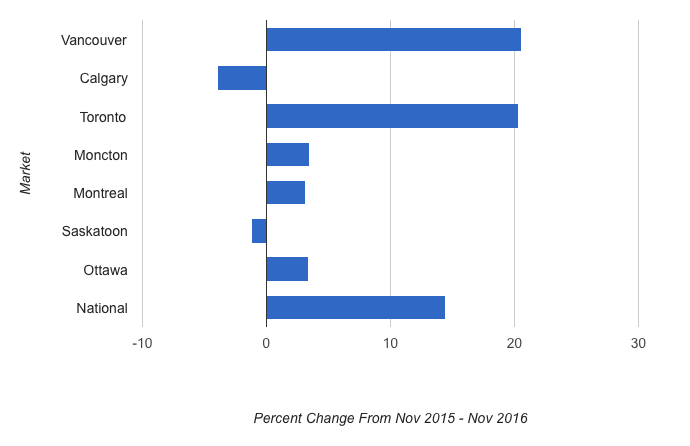 Real estate prices across Canada are now firmly above the half-million mark. The national average of composite homes is $581,400, mostly brought up by the steep prices in Vancouver and Toronto. Vancouver composite homes reached a whopping average of $908,300. Toronto is the second most expensive city at $689,100, but still 24% cheaper than Vancouver.

There are still deals across Canada if you don’t have your heart set on Toronto or Vancouver. Moncton, which was the most affordable significant market across Canada, saw composite prices rise to only $163,400. Unfortunately, most Millennials probably couldn’t identify Moncton on a map, so they probably won’t be flocking there anytime soon. 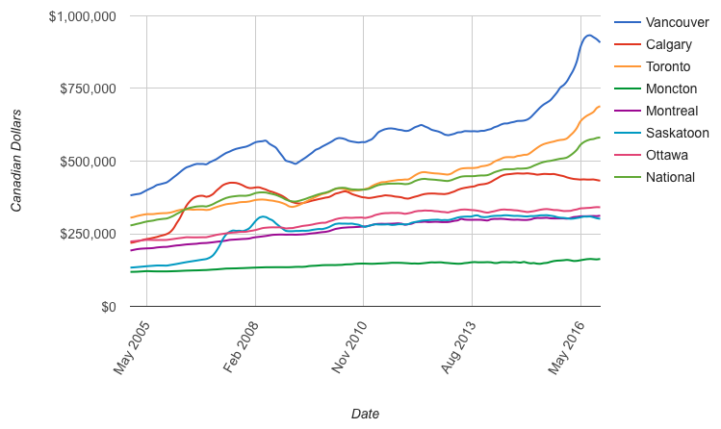 My crystal ball is a little foggy when it comes to 2017, but I have a hard time seeing prices become more affordable. Prices have reached record highs, and soared across the country. This means if prices continue up, affordability for new buyers will be completely decimated. If they go down, people that acquired record amounts of debt to purchase a home will have lost a significant amount of their net worth. Neither option really seems ideal.