Vancouver’s Rosewood Hotel Georgia will soon have a new owner. The 155 room luxury hotel at 801 West Georgia Street in Downtown Vancouver was recently sold to a Hong Kong-based joint venture. The details were announced through a regulatory filing with the Stock Exchange of Hong Kong (SEHK). The historic hotel will still be managed by the Hong Kong-based Rosewood Hotels & Resorts, so not much will change in terms of operation. I know, that’s boring. The interesting part is the financial details, and the pricing of prime commercial real estate in Vancouver.

The buyers are a newly created joint venture between two large Hong Kong-based real estate companies. The new venture will be 50% owned by Babenna, a wholly owned subsidiary of Magnificent Hotels. The other 50% will be owned by Able Shine. This joint venture will create a BC-based company, that will own this historic Canadian landmark built in 1927. The parent companies will go halves on the CA$145 million price tag. Oh yeah, and the parent companies are owned by other companies too. I know it’s a bit confusing, and they think so too. That’s why they made this nifty little structure chart to help people follow. 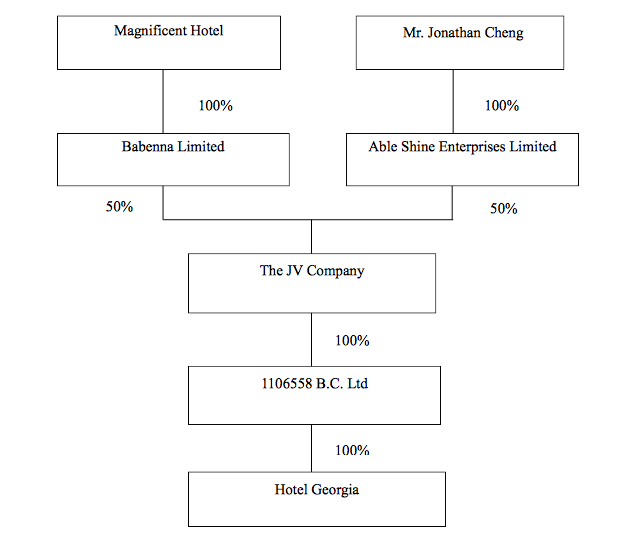 The purchase price of CA$145 million sounds like a lot, but it actually might be a deal for what they’re getting. In 2016, the hotel generated $31,479,000 – an 18% increase from the year before. Net operating profits were just a little over CA$6 million. According to the filing, the company is paying CA$750 (HK$4,355) per square foot, and produces a 4% yield by their estimate.

To put that in contrast, they’re paying 20% less per square foot than the average price of a condo in False Creek last month. The company notes they’re getting the property at a “near construction price.”

The eye popping price tag at first glance seems like a lot, but at second glance it was actually kind of low. Is the buyer just a great deal finder, or is commercial real estate in the city chasing more conservative valuations? Tweet us your thoughts.