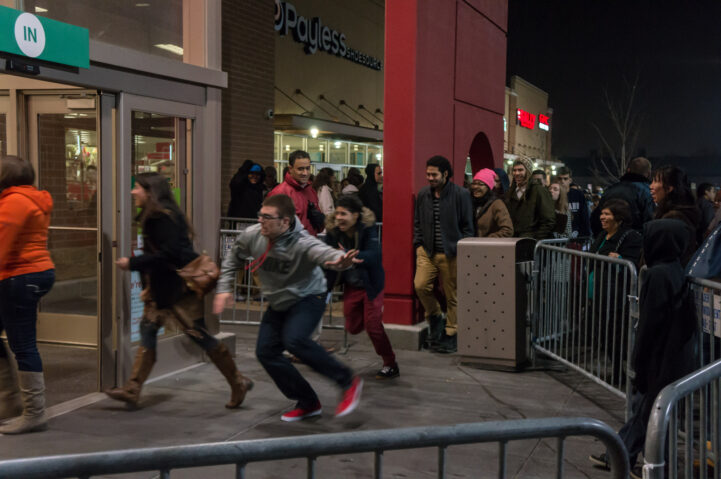 Yes, this weekend is going to be a special kind of hell. No, not because you’ll be stuck waiting in line almost all weekend. It’s actually because from Black Friday to Cyber Monday, Canadians will accumulate 3% more consumer debt. We’ll add to our epic debt pile, and more than a third of it will have almost no contribution to the Canadian economy.

Canadians Will Spend 15% More This Year

Consumer spending is expected to grow this weekend, by a lot. Payment processor Moneris predicts a 15% growth on sales from Canadians this weekend. This puts the estimated spend at $17.85 billion over just the four days. This would be awesome for the Canadian economy if the  money stayed in Canada.

Unfortunately, the benefits to Canada are pretty slim. Almost 38% of those dollars typically go to US retailers, in a form of mini-capital flight. Now with the Canadian dollar even stronger than last year, this percentage might actually be higher.

Contributions To The Canadian Economy

The money being lost to the US economy is important at a time when Canadians are in a precarious employment situation. According to the Vancouver-based VanCity Credit Union, foreign retailers with no local infrastructure only recirculate 1% of sales back into the Canadian economy. This is opposed to local retailers that recirculate 45% of sales back into the domestic economy. Any increased spending could actually provide further downward pressure to employment.

Even Russia and China are talking about our epic consumer debt bubble, and it’s expected to get worse. Canadians had $585.8 billion in consumer (non-mortgage) debt at the end of the second quarter in 2016. Since the average Canadian household has $1.70 in debt obligations for every $1 they earn, the bulk of consumer spending this weekend is likely to be put on credit. This can increase that debt load by up to 3%.

Real estate isn’t as complicated as it seems, it’s all about dollars and demand. The significant growth in debt will limit the amount of income that consumers can spend on homeownership. At these debt levels, the ability to borrow more is already a drag on growth. Any addition to debt-levels will certainly impact demand further.

Economists and bankers are right when they say debt isn’t always a bad thing, just not this kind of debt. Spending is a fundamental part of the economic process, since money needs to recirculate to stimulate the economy. Unfortunately, when the bulk of spending goes out of country, or to retailers with minimal domestic overhead, most of that money is permanently lost.