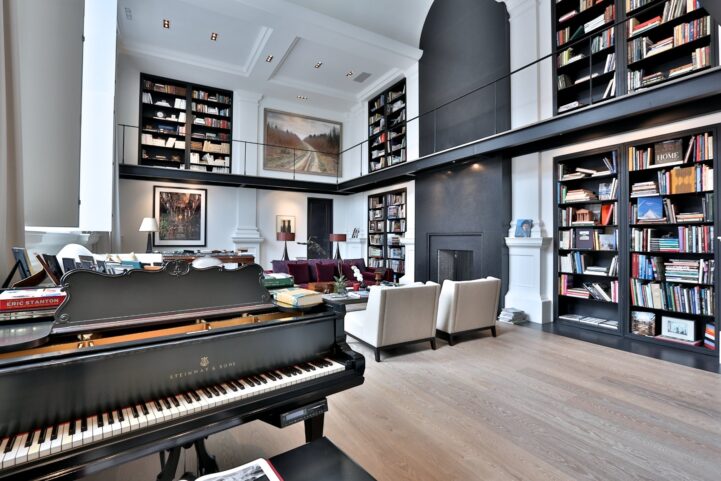 For those of you that don’t know, Joe Brennan is the home designer of choice for Toronto’s monied elite. He’s known for building amazing urban villas—including one in a back alley for Canadian Billionaire and media mogul Alain Slaight. So naturally when he listed his personal home at 510 College Street, we were dying to take a peak inside. It’s currently listed with Jimmy Molloy for $10,950,000.

This 1910 Romanesque Revival building designed by Langley & Burke is located in the former College Street Baptist Church. The church was converted by Brennan into 4 townhouses – the largest which he kept for himself. The 8,000 sq. ft, 3 bedroom, 5 bathroom home features 22-foot vaulted ceilings, stone floors, and massive Cathedral windows (he swapped the colored glass for clear so it isn’t so tacky).

Other features worth noting include a chef’s kitchen with a separate service area, 16-foot doors (yep, you read that right 16 feet!), a two story library, massive windows, and a walled garden. The glass wall in the dining room that leads to the backyard is one of our favorite features. In 2009 the church was deemed historic (meaning Brennan couldn’t modify the original walls), instead he built a separate edition which is now the dining room. That innovative solution makes the dining room and backyard a major showpiece.